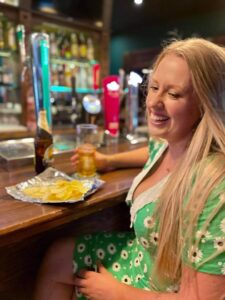 Back in the day, maybe 2 or 3 years ago I used to finish work, hop on the high stool and, if I had things to do the following day, make a list. I love using the notes feature on my phone to log certain wee things that may come into my head, a shopping list, or even the name of a song! Since then, I have discovered ‘Shazam,’ which is an app that knows any song. All you have to do is hold your phone to the speaker, and it will tell you the name and original artist. It’s magic and I love it! Now, whether or not I actually commit to what I wrote on these lists remains to be seen, and for that I have to blame whoever was behind the bar that night for twisting my arm into having yet another glass of the fruity, crisp house white, but I digress! I had good intentions when I foolishly told myself I’d be productive the next day!

So today, I was thinking of all of the Irish home comforts that are out there, and the things we may yearn for when we are abroad. Some things just aren’t the same, things like sausages and bacon, if they’re not Irish, they have no place on a Full Irish, am I right? Otherwise it isn’t a “Full Irish”! Some people will only have a certain brand of ketchup or tea bags. I am partial to a bag of Tayto, but I’m no crisp snob – especially if they’re paired with that house white I was talking about!

So when I was thinking about Irish things we may miss, I flipped it on its head and thought, if I were to move back to Ireland, what would I miss about Spain? Or what would I wish I could buy in the supermarket? So here is my list below! If you agree or disagree, let me know, or let me know your own ‘home or away comforts!’