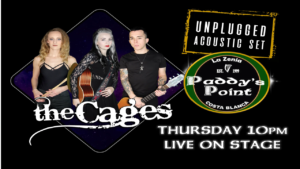 The Cages are well known along the Costa Blanca rocking and rolling with audiences of all ages. This fun and energetic band play a wide range of music to suit all tastes, ranging from classic rock to modern pop songs.

The Cages formed by Yasmin (vocals & guitar), Scott (Bass guitar) and Amelia (Drums) have been together since 2012. They might look young but they have been playing and performing on stages from early on in their teenage years. The night begins easy listening and will progress as the night goes on weaving in and out of many different styles and genres. The Cages never stick to a ‘setlist’ and play the songs they feel compliment the vibe from the audience.